I looked up at the top of the screen to realize that it’s only just now the bottom of the 6th inning.  That seems crazy because this game has been very intense and full of action right from the beginning.  Not something I would have expected with the matchup going tonight: former Cy Young winner vs. near perfect game thrower.

But you never know what to expect in baseball and neither of these guys brought their A-game tonight.

So far the Cardinals have 3 homers by Berkman, Freese and Rasmus.  The problem is they were all solo shots.  Had there been runners on, the Cardinals would easily be in the lead right now.  2 D-backs have gone deep (Jason Upton and Chris Young) for a total of 5 runs.

But the Redbirds haven’t given up; they’ve continued to chip away at Arizona’s lead and have not pulled within one.  But Arizona won’t be caught up to quietly.  So far they’ve put runs on the board in every inning.

As I type this, Arizona just scored again to continue their scoring in every inning.  So round and round it goes, where it stops nobody knows!

For the first time in 2011, the Cardinals have won two in a row.  And they did so in a big way, finally showing off the power that we have known is in that lineup all along.

Berkman hit his first home run as a Cardinal and deciding that wasn’t enough, went deep again a couple innings later.  The base hits were coming quick and coming often, something we haven’t seen at all yet this season.

Every Cardinal starter got in on the action, including starting pitcher Kyle McClellan who went 2 for 3 and got the Cardinals on the board with the first RBI of the game.  The TV announcer said,

“I’m trying to think of how many times we have said Yadier Molina scores from first on a 2 out double by Kyle McClellan.  I’m thinking this is probably the first time.”

But that’s just how the game went yesterday.  The Cardinals were getting the long ball, they were getting base hits with 2 outs and they were getting extra base hits.  The offense was starting to look alive.  Last or nearly last in every major offense category, the Redbirds are slowly climbing out of the cellar in regards to team stats, as they now stand just 2 games under .500. 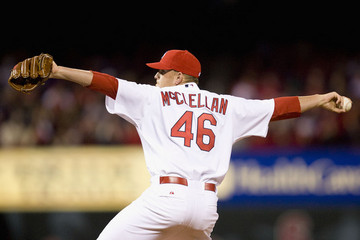 In pitching they continue to do well as McClellan not only showed off his bat, but pitched a great game too, especially for a 5th starter.  If he pitches this good all season, I will be highly impressed at his move into the starting rotation.

Overall, the Cards are at the top in most team categories.  They’re posting a low ERA, striking lots of guys out and even have a shutout and a complete game to their credit.  They are one of only two games to have that complete game thanks to Jaime Garcia’s fantastic performance.  All this and we still have our ace going to tonight, who surprisingly hasn’t recorded a win yet.

As much as things are starting to go right, it stands in deep contrast to the silent bat of our big man, Albert Pujols.  Albert went 1 for 5 last night, raising his average to a mighty .150.  This is Pujols and 10 seasons of record setting baseball speak for themselves, but he is going to have to get on track if the Cardinals are going to have a shot at winning the thing.

We’ve said since the beginning that it will be an uphill battle.  Wainwright is gone, the defense is questionable, the health of prime guys like Berkman and Freese was up in the air.  Add in the unknowns like an emergency appendectomy and it’s no doubt the Cardinals have their work cut out for them.  So they need every player to contribute and they need their 3-4-5 to stay hot.

Something about Albert’s swing looks off to me.  It doesn’t look like that pure swing he had going before.  And I can’t help but wonder if his contract is looming large in his mind.  It’s a lot of pressure, no matter how great a super start you are.

Hopefully we can gain some ground on the Reds tonight as we go against Armando Galarraga and the D-backs.  Galarraga, of course, is not famous (or probably more infamous) for losing out on a perfect game due to a bad call from ump Jim Jocye.  He will be a trivia answer for decades to come through no fault of his own.  Maybe we can make him famous again tonight: “most runs given up by a starter.”  I like the sound of that.